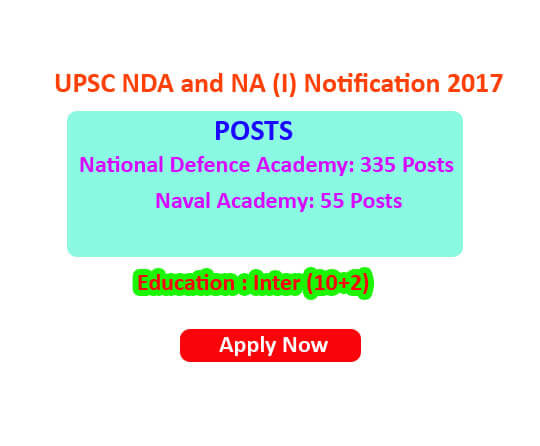 UPSC NDA and NA (I) Notification 2017 – Apply Online for 390 Defence and Naval Academy Posts: UPSC has released a notification for the posts of NDA and NA. The candidates have to apply through Online from 18-01-2017 to 10-02-2017 till 06:00 P.M.
To know about the detailed information like age limit, educational qualification, selection process, how to apply, reservation, etc., check below.

UPSC NDA and NA (I)- Defence and Naval Academy Posts Vacancy Details
Total No of Posts: 390

Age Limit: The Candidates who are eligible should be born not earlier than 02-07-1998 and no later than 01-07-2001(only unmarried male candidates are eligible).

1. Candidates are required to pay a fee of Rs. 100/- either by depositing the money in any Branch of SBI by cash, or by using net banking facility of State Bank of India/State Bank of Bikaner & Jaipur/State Bank of Hyderabad/State Bank of Mysore/State Bank of Patiala/State Bank of Travancore or by using Visa/MasterCard Credit/Debit Card.
2.Fee exemption for SC/ST candidates/Sons of JCOs/NCOs/ORs
How to Apply: The candidates have to apply online through the website www.upsconline.nic.in from 18-01-2017 to 10-02-2017 till 06:00 P.M.
Detailed instructions for filling up Online Applications are available on the above-mentioned website.
Selection Process for Defence and Naval Academy Posts

Written Examination, Psychological Aptitude Test, Intelligence & Personality Test, and SSB Interview.
The candidates who cleared the written examination should log on to following websites for their SSB center and for the date of Interview.
join Indian navy.nic.in
joinindiannavy.gov.in
career air force.nic.in

UPSC NDA and NA (I)- Defence and Naval Academy Posts(English) 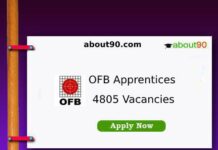