All the candidates who have appeared for SSC CHSL Tier-1 examination in the Month of March 2018, wish to check their result online on the official website. Candidates can also check the cut off marks as well.

26.51 lakh candidates had appeared for the SSC CHSL Tier-1 examination. Today (15/06/2018) SSC has been released the results and qualified candidates will appear for the Tier-2 examination.

2. On the homepage of the website, you will find the Result link

4. Results will be displayed on the screen

5. Cross-check all details mentioned in the result page 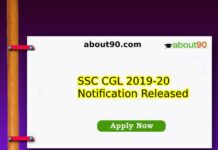